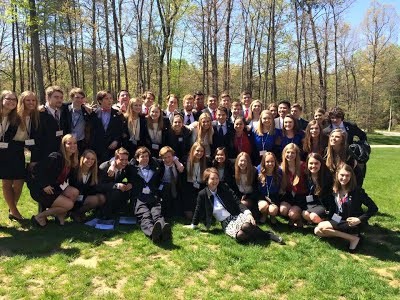 After three days of questioning by experts on the Constitution and Bill of Rights, East Grand Rapids High School students finished 8th out of 56 teams from across the United States.

According to Linda Start, Executive Director of the Michigan Center for Civic Education, finishing in the top ten is an impressive achievement.

“I was thrilled to be able to observe the last day of competition held on Capitol Hill in real Senate Hearing rooms,” said Start. “There was a great turn out from the East Grand Rapids community and the students made us all very proud.”

The first two days of competition were held at George Mason University in Fairfax, Virginia. The top ten teams competed for a third day on Capitol Hill.

Janice Yates who teaches the We the People class at East Grand Rapids expressed pride in her students. “It’s impossible to understand how impressive these young students are unless you actually see them in action,”

“They are knowledgeable and able to weave together information from all of their studies into coherent arguments. The judges kept saying their knowledge level is well beyond what they see even in law school”, said Yates.

Get Involved with Civic Education in Michigan!